Art of the Sky

Art of the Sky was photographed in the early hours of a cold winter morning.

The sky is brightening to a soft blue, and the wispy clouds burn orange and pink as the sun rises. The beach reflects the warmth of the morning light, which is just enough to pick out the undulating ripples that the retreating tide has etched into the sand. Dawn is a spectacle that evades many of us, but it can often be even more remarkable than a sunset. It’s not an end but a beginning, a brightening of the world that brings with it possibilities.

In main focus is an ancient tree, long dead but still standing with roots exposed, weathered by harsh coastal conditions. Remnants of other trees litter the beach like fossils. If the trees were living, they might tremble with the cold as the wind rolls in from the ocean.

The location is Driftwood Beach, a much revered section of Jekyll Island coast, Georgia State’s smallest barrier island. Despite its name, the weathered and twisted remains that line the beach did not drift in from foreign lands. The soil at the Northern end of the island is gradually but consistently eroding, exposing the roots of the trees. Eventually they can no longer support themselves and they fall and die, broken but still beautiful.

Ancient trees grow contorted with age as they brace against the elements. The more weathered and sun-bleached they become the more of a sculptural quality they take on. The experience of walking among them becomes otherworldly and spiritual, as the trees are transformed into monuments to the inexorable flow of time.

It’s a stark image, crisp and clear, that captures the freshness of a cold morning despite the warmth of its colors. Maybe you can imagine the coastal winds whistling through the jagged limbs of the trees. This image would add fascinating character to a home or office, bringing a calm and pensive feel to the space.

Be the first to review “Art of the Sky” 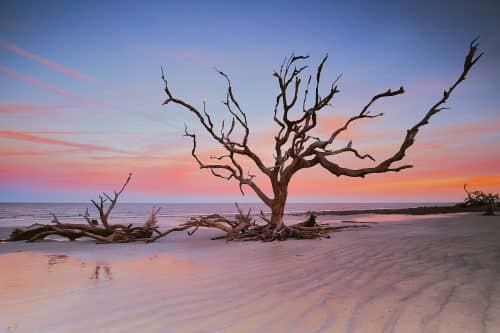