A Sip depicts an African leopard drinking at a watering hole. I shot this image in the middle of night, and it was a long wait before the leopard approached and came into view. This animal was extremely cautious, so it had to settle down to drink comfortably for a few minutes before I could risk disturbing it with the noise of the shutter.

Leopards are unsociable by nature, and often live in solitude for long periods of time. Unlike the cheetah, they hunt in the dead of night and largely remain silent except to emit a husky, cough-like call.

They do share some similarities with other cats. Their hunting behavior is very similar to a cheetah’s, in that they will either stalk or ambush their prey. Running over extended periods is not their strength, so if they fail to make contact with the initial attack, they can very rarely close the gap again to make the kill.

Leopards are known to drag their successful kills up trees, often dragging animals heavier than themselves onto high branches with powerful muscles. This, for a leopard, is akin to storing food in a personal cupboard. It ensures that no scavenging animals or other leopards might attempt to take advantage of the fresh kill.

This particular image is almost entirely filled with a black void. We are vaguely aware of the water, owing to the rippling reflection of the animal and the tongue lapping at the surface.

The leopard is defined sharply, and it’s crouching so low that it’s almost completely hidden. It’s an unusual and quietly energetic picture, and for those who enjoy the slightly darker and more dramatic views of the African plains, a print of this photograph would be an intriguing addition.

Be the first to review “A Sip” Cancel reply 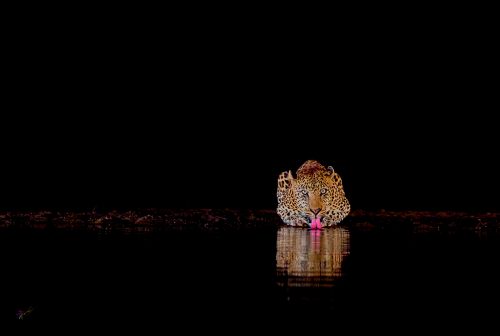