Agile is a black and white image of a male cheetah crouching at the base of a tree. I photographed this cheetah while it was hunting in a pair, and in this moment it was facing towards the bright evening sun, which illuminated the patterning of its fur.

Cheetahs are masters of their domain and they use a combination of both incredible stealth and agility to catch their prey. Much like the leopard, they use their impeccable camouflage to silently stalk the animal, keeping to long grass and using the wind to cover their scent. In this environment, you can see how easily the cheetah can sneak up on its prey, the camouflage is so effective it can make itself almost totally invisible.

Much like the other photographs of this subject, this image is imbued with tension. The viewpoint is close and intimate, and being so close places at right in the action. Action shots are maybe more telling of the lives of cheetahs, who spend a large part of their lives stalking prey. A female with cubs will hunt daily, in order to provide for the extra hungry mouths. In contrast, cheetahs only drink every 5 days or more.

The detail of the textures make this a very tactile image. The lack of color draws the eye to instead to the directionality of the cheetah’s fur and the mottled, cracked bark of the tree that frames the image. The high contrast creates a dramatic and compelling scene, and highlights the expressive features of the cheetah as it pauses in this fleeting moment of calm.

Be the first to review “Agile” 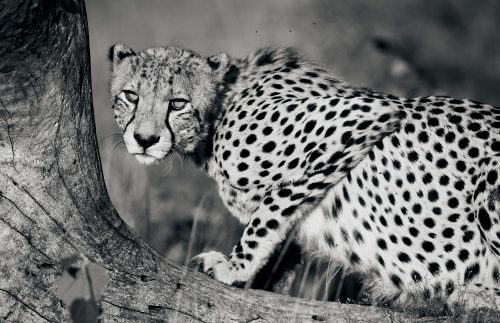