Comforting is a gentle nighttime image, photographed in Southern Africa. It shows two female spiral-horned antelopes, known as lowland nyala, tentatively drinking at a waterhole. The males and females of this species are starkly different. Males have dramatic stripes and markings of black and white on their hide, tufts of long hair along their back, as well as impressive and distinctive horns. The females are far more delicate, lacking any features except for delicate white stripes and a warm amber coat.

The image was taken around midnight, and the two females were hesitant and easily frightened. One female in the picture has plucked up the courage to take a drink, despite being well aware of the photographer. The one behind is vigilant and standing watch, locking gaze with the camera in case of any sudden movements. After a minute or two, they disappeared back into the dark bushes out of sight.

The moment hints at the relationship we have with wild animals. The role of the photographer in this image is a little more active; they influence the actions of the animals.

The water-hole acts as a beautiful dividing line, using the still water to emphasise the precarious nature of the moment. With an accidental noise they would be frightened off; the tiniest movement would shatter that moment, like the tiniest of pebbles breaking the calm surface of the water.

The water comes between us and the animals, keeping us at bay and reminding us that they are there to be seen, but not interfered with. The time of night accentuates the covert feel of the image, and frames the situation as a rare and valuable moment.

The sepia tones of the image are warm and comforting, and the picture appeals to the parts of us that get excited by chasing things that are hard to catch. It encapsulates the thrill of wildlife photography, and celebrates the beauty of their everyday lives.

Be the first to review “Comforting” Cancel reply 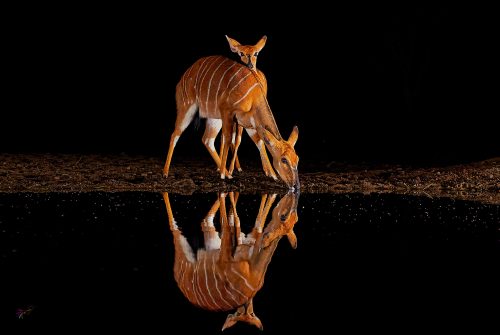