The Humble Giant is a black and white shot of a towering bull elephant approaching a watering hole in the Zimanga Game Reserve, South Africa.

The environment is dry and arid, with dead  trees and dusty ground, and the watering hole is a sanctuary for all. Animals drink, cool off and play in the water, and it’s a hugely important feature of the national park.

The African Elephant is one of the Big Five which includes leopards, buffalo, lion, and rhino. It’s a majestic animal with an intriguing family dynamic. Elephants operate as a matriarchal society and male elephants most often leave the herd when they reach adolescence. They then range the open land looking for mates, often forming groups of “bachelors” while the female offspring stay with the herd.

This bull may exude a sense of power, but elephants are also deeply sensitive creatures. The trunk can rip branches from trees but pick the smallest of flowers. An elephant is even clever enough to recognize itself in a mirror, and distinguish emotion in a human voice. Black and white photographs work well when the light or texture are more interesting than the colors. I removed the color to make the creases and folds in the skin of the elephant more pronounced. Its features now echo those of an old man, creased skin from a life well lived in the hot sun, and hooded eyes that have seen many a year go by.

An adult elephant is a symbol of power, wisdom and persistence. In this image, this magnificent bull serves as a poignant reminder to find strength within yourself, and spend our time on this world well.

Be the first to review “The Humble Giant” 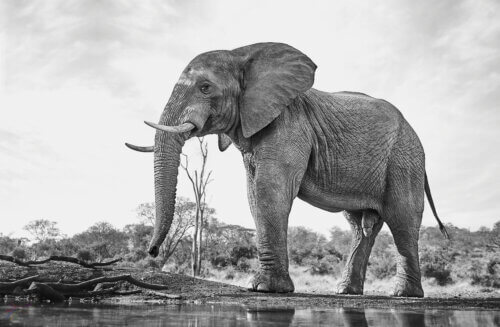