Ponderance is a night time long exposure shot of a male lion. The only available source of light this long after dusk was the safari vehicle headlamp, and the camera was supported with a tripod to get this stunningly dramatic shot. The lion was tired and resting at the end of the day, and the illuminated headlamp captured his attention.

The direct light source casts strong shadows against the animals fur and emphasizes the character of his face, and the rest of his body seems to almost melt away into the darkness.
This image shares a subject with “Candid Smile”, but preserves the golden colors of the animal’s fur. There are beautifully subtle shifts in color all along the lions body, from earthy browns along its arms to a burning amber color framing its face.
Rendering the lion in such extreme detail elevates it into something resembling a royal portrait. The face is sharp and emotive, and such is the detail that every lion photographed like this would look totally different. It focuses on the subtle characteristics of this individual animal and emphasizes its personality. The space it exists in is not important here, the value is in seeing the animal in its purest form.

A picture like this brings a sense of drama and cinematic action to a space, and would be equally at home beside neutral or vibrant tones. Whether you’re a seasoned safari explorer or someone simply wanting to bring a little adventure into your home, this print will allow you to get up close and personal with one of South Africa’s most fearsome residents.

Be the first to review “Ponderance” Cancel reply 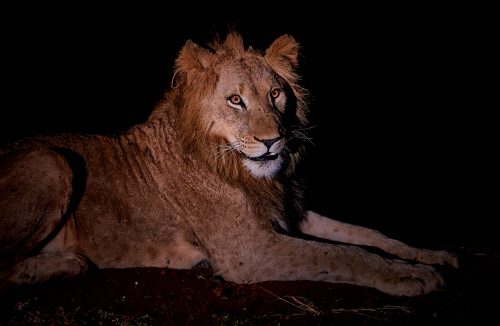