Quench The Thirsty shows a male African Cape buffalo taking drink from a watering hole . I took the photograph from a low vantage point, so the animal looks particularly imposing in this image. The bright artificial light source reflects in its horns and illuminates it against the hidden surroundings in the dead of the night. This was a long exposure image.

Cape buffalo were the most frequent visitors to the watering holes when the picture was taken, arriving in herds and engaging in social behaviors. They often wallow in the water in groups to lower their body temperature in the hot sun.

A Cape buffalo herd can contain hundreds of animals, and in the rainy season in the Serengeti, herds can reach thousands. A hoard of this size deters lions and other predators, and they can reach speeds of over 30 mph. They’re mighty creatures, and I was very privileged to be able to witness one in such close quarters.

In this photograph, the texture of the animal is one of the primary focuses. Due to the angle of the light, the rough and almost rock-like formation of the horns is visible. In older males, the horns will eventually fuse at the top to form a smooth and continuous helmet like structure. This means that by looking at the animal’s horns you can determine the age, and so the buffalo in the image is likely a young male

Often referred to as “Black Death” in hunting circles, the African Cape buffalo is a fearsome and unpredictable creature. However there is also beauty in these extravagantly horned animals.

Be the first to review “Quench the Thirsty” 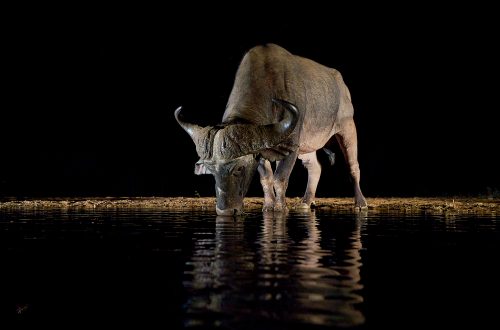