Reach Me captures the stunning moment a bull elephant approaches a water hole in South Africa.

The elephants that make their home on these plains tower above the lions, rhinoceros, and leopards, and of all the Big Five they are by far the most intelligent. When you look at this elephant you can believe it’s wise, with a face lined like an elderly man’s and slow considered movement. Elephants live in a matriarchal society and when they reach adolescence the bulls leave the heard to live a solitary life in search of a mate.

Elephants are powerful but deeply sensitive creatures. The trunk can rip branches from trees or pick the smallest of flowers. An elephant is even clever enough to recognize itself in a mirror and distinguish emotion in a human voice.

In this image the landscape is arid, and dust billows up from underneath the huge feet. It’s a picture in motion, capturing not just the look of the animal but the life, a life that can last for almost as long as ours.

The more classic black and white format creates an image with cinematic drama and mood and accentuates the sharp shadows and mottled light that play on the elephant’s face and legs. The image transports you to a different world, traversing the South African plains on a wild safari. There isn’t a building in site, and this place belongs to the animals.

This would be a great choice for someone in need of a dramatic image, to show that nature endures and remind us of the greater things that lie outside of our own lives.

Be the first to review “Reach Me” 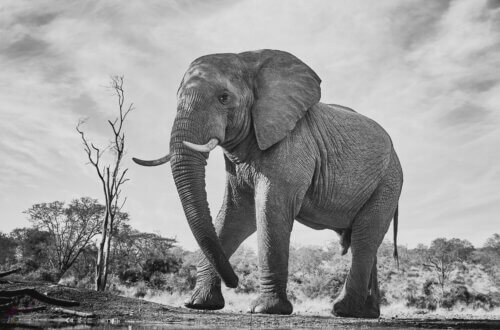