Recapitulate is a powerful photograph of a roaming male cheetah in the South African grasslands. It was hunting with another, and its partner disappeared into the vast grasslands to pursue their next meal. This one stayed put and cast its orange eyes around the place, keeping watch.

The eyes are the immediate focus of this image, pools of deep orange that reflect the light. Unlike other animals across the African plains, cheetahs cannot hunt effectively during the night time. A cheetah’s night vision is poor, but in the daytime it can see up to 5km, even in bright sunshine. Some suggest that the black tear marks running down its face help to absorb harsh rays and reduce glare for better vision.

Cheetahs are masters of their domain and they use a combination of both incredible stealth and agility to catch their prey. Much like the leopard, they use their impeccable camouflage to silently stalk the animal, keeping to long grass and using the wind to cover their scent. In this environment, you can see how easily the cheetah can sneak up on its prey, the camouflage is so effective it can make itself almost totally invisible.

The warm light casts blue shadows against the animal as it stares directly into the sun. It could be focusing on my camera or selecting prey miles behind it.

The viewpoint I used involves the viewer directly in the life of this animal, as if they are one of the pack, prowling behind the leader.

This image gets right into the action instead of sweeping wide across the space. All the focus is on the animal, and it paints an exciting portrait of one of Africa’s Big Five.

Be the first to review “Recapitulate” 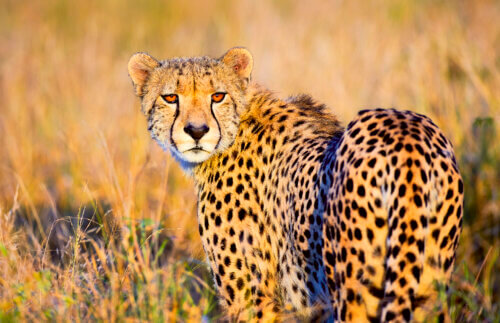