Rugged is a dramatic and powerful image, depicting a white rhino drinking in solitude at a watering hole. Against the inky night the rhino is sharply defined, and it stands with its head lowered, the rippling water showing a darkened reflection.

Rhinos are largely solitary creatures and only very rarely form groups, either as a collective to forage for food together or as a female grouped together with her calves. Male rhinos are almost completely solitary, and only associate with other rhinos when they are mating.

Despite the name, there is no difference in color between the white and black rhinos. Some argue that the term “white” is in fact a misreading of the word “wijd” meaning “wide”, referring to the shape of the mouth. You can see the wide mouth in the image, compared to the “hooked” mouth of the black rhino. Rhinos are distinct from a lot of other animals in that they still have a “prehistoric looking” body shape: A large head with a gigantic horn, a huge body with thick skin that appears scaled, much like those of the dinosaurs from millions of years ago. They are savage looking but beautiful animals, and a living reminder of the ancient history that came before us.

The water comes between us and the rhino, instilling a sense of tension in the image. The rhino is one of the Big Five, and these animals have been the target of trophy hunting and ivory poaching since humans discovered them. Now, thankfully, we are beginning to realize that photographing, filming, or viewing them on wild safaris is a much more valuable and fulfilling experience.

This would be a good choice for spaces where motivation is important. Gyms, home offices and other work spaces would benefit from the energy and power of this image.

Be the first to review “Rugged” 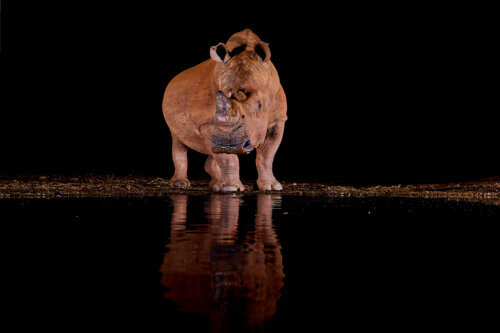