The Dignity is another stunning angle of the same cheetah from “Watch”. The cheetah is perfectly illuminated by the evening sun, and his large eyes are burning orange against the darkening blue sky. The cheetah chose this elevated vantage point to keep a lookout for prey, and this particular moment, the grazing warthogs have captured its attention.

This is a picture of exciting anticipation, at the point right before the chase. You can tell that the eyes aren’t wandering, but instead they’ve locked onto an unfortunate target in the distance.

In the strong evening sun looking out over its domain, this animal looks kingly, and the image focuses on the determination etched onto its face.

For a cheetah, these moments are a matter of life and death. They don’t know when the next meal will come if they fail to make the kill, so they have to choose their moment. They often stalk their prey for miles and sneak up to them carefully, waiting until they’re just meters away before striking.

The close up quality of this image gives it a textural quality, picking out the way the fur gently undulates down its body. Excitement ripples through the image, and transports you right into the action of the South African safari. It gives us a rare glimpse into the emotional qualities of these animals as they go about their lives, and engage with the brutal yet beautiful world that they inhabit. In a workspace or living space, this picture would inject excitement and elegance. It has tremendous warmth in its colors, and would compliment both neutral surfaces or natural wood tones. 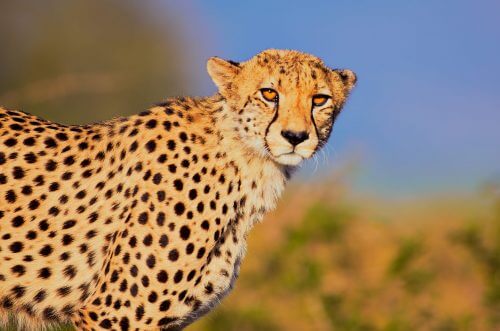