The Hunters is a wonderfully intense shot of two male cheetahs in the South Africa Zimanga Game Reserve. They were tracked for a long time as they searched for their evening meal in the grasses, and eventually broke their stride for just long enough to turn their burning orange eyes towards the camera. Low light casts long shadows as they prowl and they’re crouching low to avoid detection.

Cheetahs are masters of their domain and they use a combination of both incredible stealth and agility to catch their prey. Much like the leopard, they use their impeccable camouflage to silently stalk the animal, keeping to long grass and using the wind to cover their scent. They’re able to sneak within just meters of their quarry, and when the time is right they strike with a single explosive attack at awe-inspiring speed. A creature built for rapid motion, a cheetah running can reach well over 100 k/h.

Cheetahs aren’t brash or loud like lions and other big cats. They spend their lives in relative solitude, rarely emitting more than a growl to keep others away. It makes the image that much more special, that we can catch a glimpse into the covert beauty of the cheetah and even see it in action.

This print is an amazing window into the intense dynamics of the natural South African landscape. It’s the perfect piece to add some wild safari drama to the home. 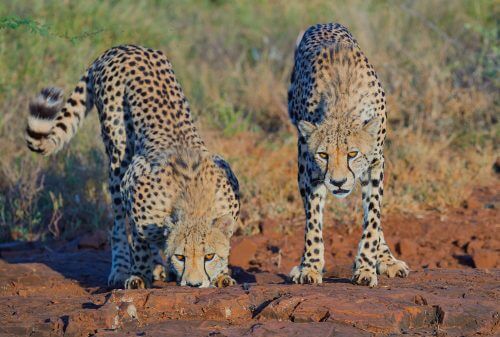