The Perception is a simple and dramatic photograph of an African leopard, seemingly peering at its reflection in the surface of a watering hole.

The waterline bisects the image and creates a composition of perfect symmetry, and the negative space between the legs and tail of the animal become strange abstract forms.

The tail hangs in a gentle arc, almost touching the water.

Against the inky black the animal is startlingly vibrant. In contrast to the daytime where It would become invisible against the grass, here at night it shines brightly.

Photographs often portray leopards as fearsome creatures, but this moment shows a delicate moment of quiet solitude. We can see it acting like any cat could, lapping gently at the water.

The rosettes that cover its body are in full view as the leopard shows its side, and the effectiveness of the camouflage is evident even here. It’s difficult to see the contour of the body and limbs; the form is distorted by the dizzying pattern.

This photograph has a gentle feel, and is a beautifully simple portrait of a leopard in its element. 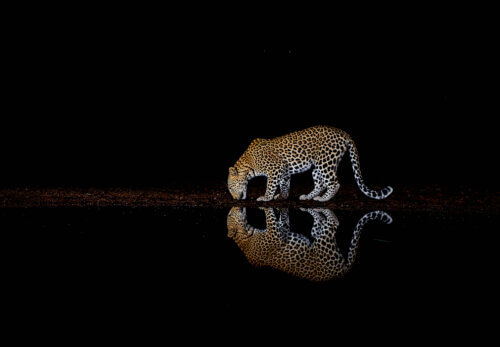