The View is a stunningly intense photograph of a male cheetah hunting in Southern Africa, taken on the first day of a photo-safari. The cheetah was in a pair, and this one was the watchful, cautious one of the two, casting its orange eyes around to survey its surroundings while the other darted around in the bushes.

The beautiful details of the cheetah are rendered in razor sharp focus against an almost watercolor-like haze of a background. The sharpness of the fur makes us feel close to the animal, closer than we would perhaps ever be able to get on our own. It brings the cheetah’s gentle feline features into view; you can even see the fine whiskers that line its mouth.

It’s a tactile image that’s full of textures. The fur and fine hair of the animal, the rough twisting bark of the tree. The cheetah’s most interesting features are put front and cent re and illuminated by the strong evening light. Its spots are inky and dark, and its orange eyes face directly into the sun. It’s all framed by the simplistic background, with only a hint of blue sky to break up the warm hues of the cheetah and dry grassland.

For those that are drawn to interesting textures, and for those who pursue the artistic potential of everyday life, this print would be a continual source of inspiration It’s an image you could look at many times over and find something different each time. 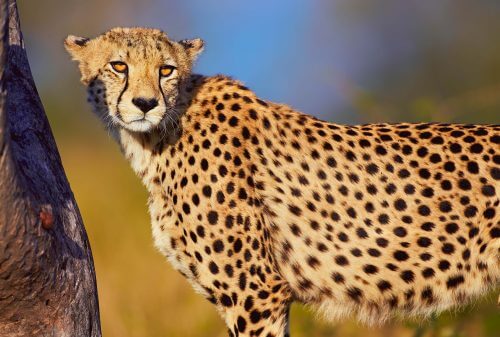