The Watch is a close-up photograph of a male cheetah, taken on a safari through Southern Africa. This animal was hunting with another, and its partner disappeared into the vast grasslands to pursue their next meal. This one stayed put and cast its orange eyes around the place, keeping watch. It’s a picture of silent determination, filled with exciting tension and electric atmosphere.

Cheetahs are masters of their domain and they use a combination of both incredible stealth and agility to catch their prey. Much like the leopard, they use their impeccable camouflage to silently stalk the animal, keeping to long grass and using the wind to cover their scent. In this environment, you can see how easily the cheetah can sneak up on its prey, the camouflage is so effective it can make itself almost totally invisible.
The focal range in the image is shallow, and everything but the cheetah is softened into a blotchy haze. The positioning places us right in the action, as if we’re taking part in the hunt alongside the animals. Shrubbery partially obscures the animal, as if we too are crouching low to avoid the detection of our prey.

Instead of an image that emphasizes the static beauty of an animal, this photograph captures the thrill of the chase, and the wonder that unfolds in the everyday lives of these animals. Especially for a cheetah, these moments are a matter of life and death. They don’t know when the next meal will come if they fail to make the kill.

If you’re looking to inject excitement and energy into a space, this is the perfect print. It invites determination and a will to succeed.

Be the first to review “Watch” 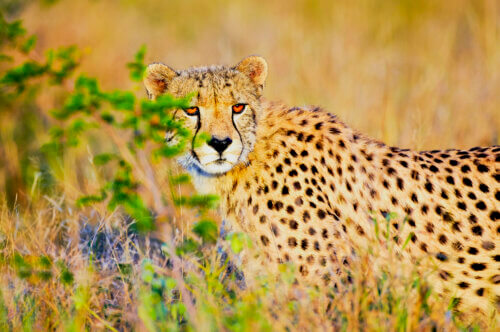