Whisper was in fact captured on the way to the setting of another planned photograph. The intention was to capture elephants roaming by the lake, but as is often the case, a chance encounter presented the opportunity to capture this sweet and intimate moment.

The image is presented in black and white with high contrast, picking out the iconic pattern of the animals, and the thorny brambles that they tower above.

These two young males are in fact engaging in an activity known as “necking”, a combat behavior that adult males use to fight for dominance. These two males are not at a fighting age, and they engage in a bout of playfighting instead, mimicking the older males.

This photo could be interpreted in a number of different ways. There seems to be an exchange of some sort happening, the telling of a secret or a soft conversation between the two. To someone who isn’t attuned to the behaviors of these animals, it could be a couple sharing an intimate moment. Whether its a couple, two brothers or even strangers, there is an intimacy and romanticism to this photograph, and the sparse background hones in on the subject. The space around them is not significant; it is solely the simple exchange between these two magnificent creatures that draws us in.

As a print, this image emphasizes gentleness. It suggests the need for sharing special moments with others, and the importance of connection. It would be perfect for a couples bedroom, or any part of the house or office where it could act as reminder to stop and enjoy the company of those around you.

Be the first to review “Whisper” 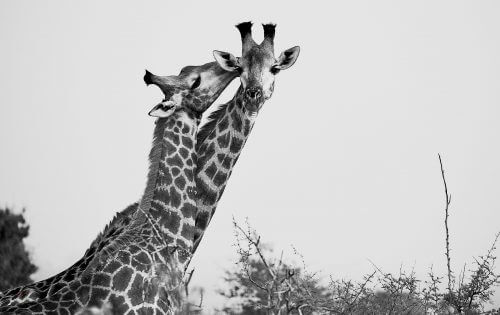