I photographed Dark and Fear at midnight; it depicts a young African Cape buffalo drinking alone at a watering hole. Cape buffalo most often travel in herds, so seeing one drinking in solitude was an especially intriguing moment. Cape buffalo are one of the Big Five, a group of especially iconic and fearsome animals that populate the African plains. The other four are lions, rhinos, leopards and elephants. The Big Five is named as such because when hunting was more widespread, those animals were the most dangerous targets for a hunter to pursue.

This photograph has a bubbling energy, the kind of energy an animal holds when it’s just about to charge. While the buffalo was taking a quiet solitary drink, the shock of the camera flash would have suddenly alerted it to potential danger, and in this moment it would be readying for an attack.

Beyond the emotional aspects of the image, the composition is stripped down and simple and the intense dark creates a cinematic effect. My camera flash cast sharp shadows onto the animal, and the position of the head drew my focus to its horns.

The isolation of the animal in void space creates a reductive image that almost seems surreal. It creates space for imagination in the viewer’s mind: What does the environment look like when it’s light? Are there twisted trees behind the animal or miles of open grassland? Are there other animals roaming?

This is an intriguing scene with a lot of powerful energy, and would add an electrifying presence to any space. For fans of the cinematic style and classical back and white photography, Dark and Fear is an excellent choice.

Be the first to review “Dark and Fear” 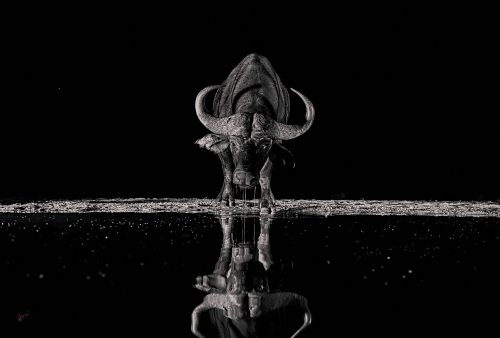