Puzzled is a wistful black and white portrait of a grazing zebra in the plains of South Africa.

The aim for this part of the day was to find lions, but the opportunity called for us to change tack to focus instead on the remarkable herd of zebras that had crossed our path.

The image is black and white to focus on the marvelous patterning of the animal and distinguish it from the background that sinks out of focus. On the day there was a heavy mist in the area with limited light, so I had to overexpose the background in order for the zebra to come fully into view. Desaturated, the background looks like it’s glowing and the coat of the zebra is displayed with maximum definition and contrast.

It’s almost unfathomable that a pattern such as this could appear in nature, instead of on the canvas of an Abstract Expressionist artist. A zebra’s coat is unlike most that dwell in the same areas, most being brown or grey or amber toned. Instead of a tool to make the animal blend in and remain inconspicuous against the grassland, it stands out brightly. It is an area of debate as to why the zebra needs it’s stripes. Some say it’s to dazzle any flies that attempt to land on it’s back to bite them, and other’s speculate that it could be to confuse predators like lions and hyenas.

It’s a simple composition that focuses directly on the animal, and brings us in closely. The zebra seems kindly and calm, and it fills the image with warmth. Embellished is a photograph that celebrates the simply beauty of the animals that inhabit this area.

Be the first to review “Puzzled” 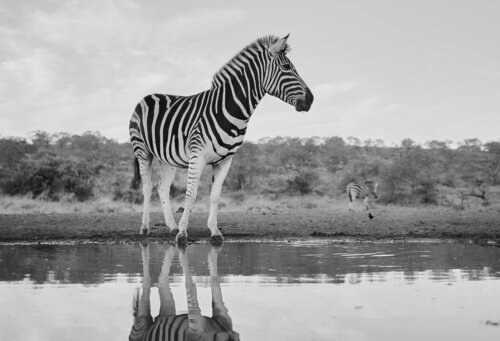