Reflect is a thrilling action shot of an African leopard prowling around the edge of a watering hole in South Africa. In the middle of the night and with only the camera flash to illuminate the scene, the background is cloaked in darkness. The leopard’s eyes are intently focused in front of him. Perhaps he’s aware of me, or maybe he’s keeping watch for prey.

As nocturnal predators, leopards hunt at night and they prey on an eclectic range of animals. Antelopes, warthogs, snakes, birds and even porcupines. Leopards are largely silent creatures, and can slink through the undergrowth on large padded paws making almost no sound at all. This image illuminates the fluid and careful motion of a leopard carefully making its way through its environment.

The water is completely still, mirroring the leopard as it pads its way right along the edge of the water, and creating an image of perfect symmetry.

A scattering of leaves, sticks and other debris line the water. Without it the animal would be totally suspended, wading through the darkness like a phantom.

The form of the animal itself is still obscured, the rosettes that cover its body make it hard to see where legs, torso and tail begin. It becomes more of a shifting pattern, even its head sinks into its body.

For those interested in the slightly more unusual and artistic face of wildlife photography, Reflect (as well as the other shots available of this particular animal) is a fitting image. 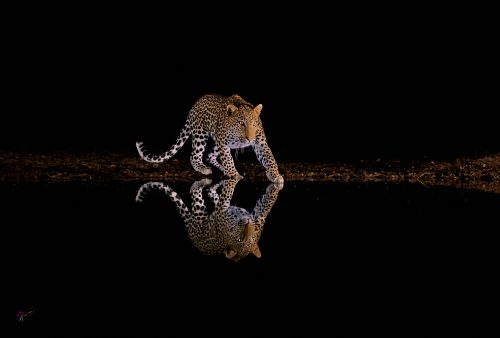